​​​I - 477 Fla. kids MURDERED in the DCF under Crist & Scott in 6 years! More have probably been killed since then.

5 - Only a little over half of ALL 3rd graders can read "See Spot Run"or do math on their level.

That's not only a shame - it should be a crime to invest Floridians hard-earned money to help another state when we are losing our homes, jobs and families!

I'll do what President Kennedy did. He used the National Guard to protect kids in Alabama. As Senator, I'll try to get the President to declare a 'State of Emergency' or as Governor, I'll do it myself and  mobilize the Florida National Guard and assign a soldier to protect each of the remaining kids who are lucky enough to still be alive!

Plus, I'll assign some of the 500,000 unemployed workers to check on kids in their neighborhoods for a few minutes at school each week. Their unemployment checks will become a paychecks.

This can be done because mentors in the 'Take Stock in Children' program already visit kids for one lunch period a week. 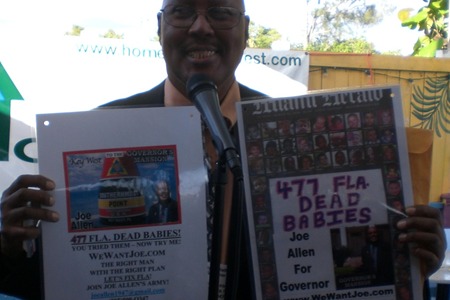